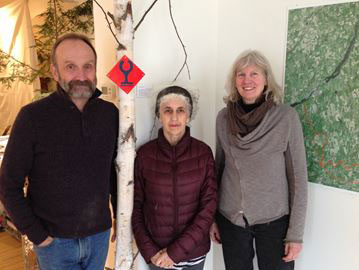 The gala reception for Miikaans/The Percy Portage exhibit at the Ah! Arts and Heritage Centre will be held April 2 at 7 p.m. Standing next to one of the many historic maps on display are a couple of the curators of the exhibit, Stewart Richardson and Sheree Rasmussen with Dorothy Caldwell, a director with the Ah! Centre board.

The Percy Portage exhibit at the Ah! Arts and Heritage Centre, a display that includes historic maps and more about a route that many local folks still don’t know is a part of the history of this region.

Miikaans is the Ojibway word for trail or path.

The Percy Portage was an important route used for centuries by the Mississaugas, Huron and Iroquois First Nations. It also formed the basis of the first major road in the region in the early 19th century for local settlers, and those heading north.

Des Conacher, one of the curators on the committee of four that volunteered their time and expertise to put the exhibit together, said, “The historic maps are really the backbone of the exhibit.”

The committee includes Clive Russell, co-founder and creative director of the Centre, his wife Sheree Rasmussen and Stewart Richardson.

The Percy Portage was a shortcut for travel from Rice Lake to Lake Ontario, a route which bypassed waterfalls and rapids between Hastings and Meyersburg, an overland route that allowed First Nations people to travel safely to Lake Ontario.