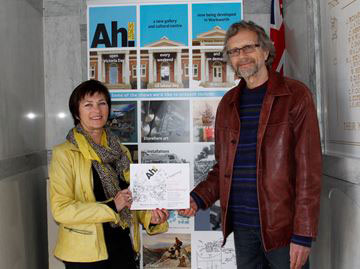 Warkworth – The life and work of Warkworth artist Clive Russell will be celebrated with an opening reception of an exhibition at the Ah! Arts and Heritage Centre.

“This show is a glimpse into the studio of Clive Russell, a place where he drafted, drew, painted, modelled, wrote, collaged, invented, dreamed and sought after ways to express and understand the deep connections and meanings within the everyday world that we inhabit,” said Sheree Rasmussen, the love of his life and curator for the event.

“The focus of this exhibition is on the work that he did in the past eight years while living in the Warkworth area, set in the context of some of his earlier life and work,” Rasmussen explained.

The artist was the founder of the Centre and is described as having “a highly important influence on the local community.”