Preoccupied With My Father – A Memoir in Pictures 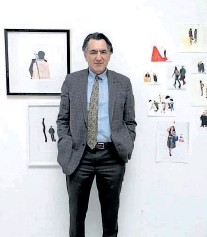 WARKWORTH – Described as an amalgam of poetry and expressionistic paintings, artist Simon Schneiderman’s Preoccupied With My Father – A Memoir in Pictures, opens at Ah! Arts and Heritage Centre of Warkworth Sept. 16.

The exhibition, curated by Louise Lipman runs until Oct. 9. An opening reception is scheduled for Sept. 17 at 7 p.m. An artist talk will take place Oct. 1 at 5 p.m.

The exhibition is Schneiderman’s narrative of the life of his father, a Holocaust survivor.

“Simon Schneiderman’s graphic story of loss and dislocation resonates all too well in the contemporary displaced of millions around the world,” said Lipman in a curator’s statement. “In pictures and only 800 words Simon’s story of grief and ritual is a love poem to his father who was ‘living in this world haunted by the last’. Told through the eyes of a child and painted in a naive style, Simon is not only honouring the dead but reflecting a mirror on daily life at the edge of the apocalypse. The focus of this exhibition is the Holocaust but it is really the story of family and the prism of memory.”

Schneiderman was born in 1947 in a German DP camp run by the UN. He first wrote for television before spendig many years painting, drawing and doing comic strips and animation in tandem with drawings of the human form, all while practicing law.